When foreigners are offered a permanent job at NASA, the condition is that they should apply for and get a US Citizenship. Arun. P.V. who hails from from Manimala in Kerala, got an invitation from the American space research center NASA to work as scientist there. He had completed his M.Tech from Bhopal NIT and after a stint at the renowned Bhabha Atomic Research Center, he completed a PhD at the Masachussetts Institute of Technology. While at the MIT, NASA Extended the invitation. Arun joined work on a fixed term contract.His exceptional caliber and genius led to an offer of a permanent position at NASA.

All other candidates who were invited by NASA for a permanent position, accepted US Citizenship, and joined NASA. However, Arun was adamant that he would not give up his Indian Citizenship for the job. His stand was that if that was the condition, he was more than willing to forego the offer from NASA. He informed NASA that he was willing to quit and return to India if his condition was not acceptable by NASA.

NASA and the US Government must have been very impressed by his patriotism as well as his scientific caliber from what happened afterwards. Arun, a very junior scientist, was included in a high level science and technology co-operation delegation from the US to India that arrived two weeks ago. It was renowned computer scientist Dr. Barbara Liskov, who was also on the delegation, who informed Home minister Rajnath Singh about the courageously patriotic stand that Arun had taken.

Rajnath Singh updated PM Narendra Modi about this, and the PM invited Arun to his official residence for a half hour chat. He told Arun that the doors to the Indian Space research programme will forever be open to him.

We Salute the patriotism of this True Indian. Hats off to you, Arun!

Pavakkai Pitlai (Bitter gourd Pitlai) is a famous kuzhambu / gravy in Kanyakumari district, Tamil Nadu. Many people do not eat bitter gourd because of its bitter taste, but for me I just love the core of this pavakkai. My mom makes pavakkai stir fry and I never found bitter taste on it. My ammama (Mom’s mom) makes this bitter gourd pitlai often and I just loved at the first time itself. She adds soaked chickpeas or peanuts. That was really awesome. Here I am brining this pitlai recipe which I learnt from my ammama. Enjoy this pitlai and am sure even non eaten bitter gourd people too will start to eat this
Click here for the recipe:
http://kausalyashankarnambi.blogspot.com/2014/10/pavakkai-pitlai-bitter-gourd-pitlai.html

"…as Swami Vivekanda famously said, you cannot teach the Gita to a hungry man. So Modi is rightly focused on economic growth as a priority. It is best to understand India as a redeveloping nation. Just a few hundred years ago it was one of the richest countries and with forward looking policies and clear thinking there is little reason why it cannot get there again."

Who is this man who features in every #PrimeMinisterModi’s speech ? 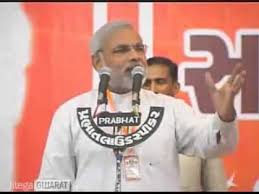 ABVP activist Rashmi Das probably speaks for lakhs of swayamsevaks when she says it’s high time the political right developed its own iconography, to challenge the domination of the left. Deen Dayal Upadhyaya has been added to the pantheon of Mahatma Gandhi and Ram Manohar Lohia (both already appropriated by Modi). Certainly, Upadhyaya appears to represent a counter-to-Nehruvian thought and its hallmarks, like state control over the economy, an idealistic foreign policy as represented by Panchsheel and pro-minorityism.

I Support Narendra Modi with Vijay Manohar Agarwal and 5 others

As the standoff between the Indian Army and its Chinese counterpart in the Chumar area of the Ladakh sector is nearing to an end, a key aspect in the entire episode, namely the firm leadership provided by PM Modi in handling of the situation and the deft role played by his team in the PMO in defusing the crisis, has however gone largely unnoticed.

It was on PM Modi’s initiative that NSA Doval had visited Beijing as the former’s Special Envoy almost a week before Chinese President Xi’s visit to ‘set the overall bilateral tone for it’.

This eventually played a significant role from behind the scenes in managing the crisis on account of buildup of the PLA troops in Chumar sector, senior government sources said.

"The NSA and his office were constantly on top of thesituation and activated all possible channels agreed between the two sides for dealing with the situation," another official noted.

The PMO resourced these channels to create the atmospherics and convert it into an agreement between the two sides for an early solution. The initial chemistry generated by the NSA during his Beijing visit was capitalized upon by the PMO to usefully leverage itself into a position of strength.

Seized of the unfolding developments in Chumar, the PMO immediately multi-tasked the Indian Army and the Ministry of External Affairs (MEA) to work out in tandem the ground mechanics of implementing withdrawal protocols with time bound compliance of progress made. The Army Chief was directed to monitor the situation closely and defer his visit to Bhutan.

Diplomatic maneuvering ‘was deftly calibrated’separately by the PMO apparatus, to keep the PM regularly briefed. Chinese Ambassador to India Le Yucheng met government officials almost on a regular basis for deliberations but he was ‘neither summoned nor served a demarche’. Indian Embassy in Beijing also’did not hand over any protest letter’ to the Chinese foreign Office.

As per the worked out protocols, Flag meeting was convened by the Indian army on the ground. Subsequently, Indian Embassy in Beijing and the MEA in Delhi were asked to work simultaneously with the Chinese Foreign Ministry and their Embassy here respectively, to appreciate the need to quickly de-escalate the troops build up.

Thereafter, the Army was given a go ahead by the PMO for another flag meeting, at which modalities of withdrawal of PLA troops were arrived at. During the entire episode, it was ensured that the Indian contingent on the ground did not concede any advantage to their Chinese counterparts. Parallel networking was also being done quietly with the centralintelligence and paramilitary agencies.

It is also for this reason that the PMO had stressed on need for inclusion of the ‘unresolved boundary issue’ and ‘need for peace’ as the central themes of PM Modi’s discussions with President Xi.

"The message was loud and clear from the PMO with Modi referring to settlement of the boundary dispute during the meeting with Xi and again in his press Statement," a source said.

The Joint Statement issued thereafter pointed out that resolution of this protracted issue was a ‘strategic objective’ for both sides and that China will work to settle the border issue in a manner ‘respectful and sensitive to each other’s concerns’ at the earliest. Within 72 hours, the Chinese troops had started moving back into their territory.

India has a geographical and therefore strategic advantage in Chumar. Indian Army has erected an observation post and is building a bunker in the area. The observation post enables the Indian troopers to keep a watch deep inside the Chinese territory. PLA wants to thwart this move and therefore has been trying to builda road in the area by encroaching into the Indian Territory with the objective of seizing the strategic advantage that India has.

India’s timely action has denied this advantage to the Chinese side, with PLA troops pulling out from the R-30 position since the 23rd September, and Indian Army and ITBP troops remaining deployed in the Chumar sector at locations logistically better. Equally important,is the fact, that whatever outcome has been achievedreflects a rare newfound degree of maturity, of the political leaderships, in India as well as in China.