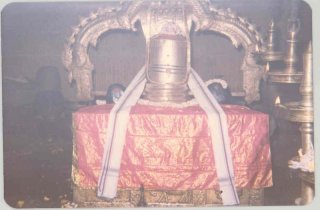 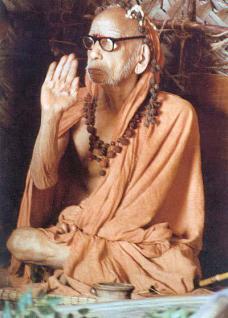 Very eager to offer the Rudra-Prasad to Maha Periyava, Sri Narayanaswami Iyer reached Kanchi the very next day. He had packed the Prasad in a plantain-leaf covered with a new silk shawl.

At Kanchi, after finishing the daily Puja, Sri Maha Periyava was giving dharshan. A lot of people were waiting for the dharshan. When his turn came, Sri Narayanaswami Iyer was shivering and lost his voice. He did a sashtanga namaskaram. Maha Periyava looked at him and raised his brows, meaning “Whats the news?”

Sri Narayanaswami Iyer opened his prasad packet, kept it in a plate and offered it to Maha Periyava – still shivering in reverence. The Prasad offering had vibhuthi, Kumkum, chandan, vilva leaves, 2 half
coconuts, and bananas.

Maha Periyava: “This prasad is from which Kshetram?”

Sri Narayanaswami Iyer: “ Periyava, I organized a Rudra abhishegam yesterday in Tiruvidaimarudoor for Maha Linga Swami. I brought this Prasad for Periyava from there. I am offering it for Periyava’s anugraham”.

MahaPeriyava was looking at that plate containing the Prasad. And then asked him: “Narayanaswami, you are a rich man; still did you share the expense with someone else for this Abhishegam?”

Sri Narayanaswami Iyer: “No Periyava…I bore all the expenses myself”. Maha Periyava was smiling after hearing the emphasis on “I, myself”.

Sri Narayanaswami Iyer: “No Periyava…for the last 2 or 3 years we are not getting good harvest from the fields…..some lands have not yielded anything…..Muthu Josiyar asked me to conduct a Rudra Abhisegam on Chitra Pournima day for the best yields….I did that after believing him, Periyava”

The Acharya still has not accepted the Prasad. “ This means that you did not do it for aathmaartham or Loka Kshemam….!”, saying this, Maha Periyava closed his eyes and meditated for 15 minutes. When He opened His eyes, one could understand that he was very clear as to what had happened.

“ Who are they, you only organised them, right? From which place are they ?” this was Maha Periyava.

By now the devotees around were wondering why Sri MahaPeriyava was so inquisitive. Sri Narayanaswami Iyer took out a paper and read out the names. “…….Tiruvidaimarudoor Venkatrama Sastrigal, Srinivasa Ganapadigal, Rajagopala Swouthigal…..” MahaPeriyava intervened, “ Oh… all of them are great Vedic Pundits….just see in your list, if you have Thepperumanallur Venkatesa Ganapadigal”.

Sri Narayanaswami Iyer was very happy to find that name in his list. He exploded: “yes, yes, Periyava, he was there yesterday….”

Mahaperiyava : “besh….besh…..Venkatesa Ganapadigal was also there…Very good. He is a great Vedic Pundit! He is getting very old now. Nowadays he chants Rudra Japam with great difficulty.”

As if he got the point, Sri Narayanaswami Iyer immediately said: “ You are very correct, Periyava. He did not do the Rudra Japam properly. Most of the times he was sitting with his eyes closed without chanting…..and the number of Japams got reduced because of that……I was wondering why I invited him”.

Maha Periyava got annoyed with Sri Narayanaswami Iyer. “Just because you have money, you cannot assume you can say anything! Do you know the qualification of Thepperumanallur Venkatesa Ganapadigal? You are not even comparable to the dust in his feet. How can you say that about him?

Now I understand what happened yesterday. Now you answer me. When he was sitting with his eyes closed, did you not go to him and shout at him saying ‘For the money you are getting, why is your mouth keeping shut?’

There was absolute silence there. The devotees were stunned. Narayanaswami Iyer, who was at ease a minute ago, started shivering again, fell down on his knees, got up, closed his mouth with his palm and with tears in eyes said, “I was wrong, Priyava…please, please forgive me. To Ganapadigal, I said exactly what you just now
described. Please forgive me”

“Wait, that is not it. There is more. Did you give dhakshina to every Pundit? How much did you give?” – Maha Periyava.

“ I gave ten rupees to each of them” – NI, with great difficulty.

“ I know everything….tell me again. Did you give ten rupees to everyone?” – Maha Periyava.

Narayanaswami Iyer was quiet. But Maha Periyava did not leave him. “You are ashamed to tell me. I will tell you what happened. You offered the ten rupee sambhavana to each Pundit. When you came near the Thepperumanallur Ganapadigal, you reduced the sambhavana to seven rupees since you thought he did not do the Japams continuously. You felt vindicated by this! And you were happy! But the Ganapadigal did not care. He smiled at you and took it……Tell me all this is true?”

The devotees did not know how Maha Periyava knew all this. Narayanaswami Iyer was stunned and silent. He repeatedly pleaded guilty and said he would never ever do such things in future.

While Narayanaswamy Iyer was feeling ashamed and was pleading guilty, Maha Periyava did not stop there.

“Wait…I would have been happy if it ended here. Did you organise lunch for all of them at Ramachandra Iyer’s house?”

“ You served very well……the Chakra Pongal was like Amrut, made with a lot of cashews and raisins; overflowing with ghee… was served personally by you. Right?” – Maha Periyava.

“ Yes Periyava, I served the Chakra Pongal myself” – Narayanaswami Iyer was pleased to say this.

“While serving, did you do it with clear conscience and follow the proper etiquette and decorum? “ – Maha Periyava.

No response from Narayanaswami Iyer. “OK. I will tell you. Since it tasted very good, all the Pundits enjoyed it and asked for more Chakra Pongal. You also served them more and more. But when you saw Thepperumanallur Ganapadigal asking for more, not once but many times, you pretended as if you did not even hear him! So many times he asked for more! Yet, not once did you respond. Is this dharma? You cheated him off….You played so dirty. You deceived him, you betrayed him, you insulted him!”. Acharya looked very upset and sad.

Narayanaswami Iyer was standing there, fully ashamed of himself. Maha Periyava changed his position and sat straight as if Lord Parameshwara was sitting there. After 15 minutes of silence and meditation, Maha Periyava opened His eyes. “Mirasudarvaal, you must understand one thing. The Ganapadigal is now 81. He has been chanting Rudra Japam from the age of 16 at many Siva temples. Sri Rudram is embodied in every nerve of his, and runs in his breath and his blood. He is such a Maha Purush. What you displayed was absolute sin. Nothing but sin”. Maha periyava could not talk any more.

Maha Periyava continued: “The insult you heaped on him affected him thoroughly. Do you know what he did? He did not go back to his village. Yesterday evening he went straight to Maha Linga Swami temple. After three pradhakshinas, he stood in front of the Swami and do you know what he prayed for?”

Maha Periyava had difficulty talking. He continued after some time…”with tears rolling down his cheeks, ‘Appa Jothi Maha Lingam! You know I am your ardent devotee. You have heard my Rudra Japams so may times in your Sannidhi, from my young years. I am now 81. Am very strong at heart, but the strength in my voice has diminished. You are well aware of what happened during lunch today. That Chakra Pongal….was so tasty…. And leaving aside my shame, I was pleading for some more….so many times. That Mirasudaar just pretended as if he did not hear me and went away. You know I like Chakra Pongal so much….I felt so bad that he did not serve me more in spite of my pleading. But later on, I realised that I should not have that kind of attachment to a mere dish. That’s why I am standing in front of you. When people go to Kasi, they give up a vegetable and a fruit. You are the same Lingam in Kasi as well. That’s why I am promising you that from this minute on, till my jeevan leaves this body, I am giving up not just Chakra Pongal, but any sweet dish. I will not touch. Maha Lingam, this is my promise… I am taking leave of you’. So saying, with more tears from
his eyes, the Ganapadigal left for his village. Now you tell me, Narayanaswamy Iyarvaal, was it not a sin you committed? Will Maha Linga Swami accept your actions?”

Maha Periyava stopped here. It was 3pm. He refused the Biksha for the day. No one left that place. Tears in everyone’s eyes.

Narayanaswami Iyer fell on Maha Periyava’s feet. He was sobbing, uncontrollably. Unable to speak, but still managed to say, “Periyava, I feel very very ashamed. I made a big mistake. I will never do this
mistake in my life. Please pardon me. Please, Periyava. Please tell me that you forgive me….Please take this Maha Linga Prasad and pardon me. Please Periyava”. Even then Maha Periyavaa didn’t touch the Prasadams brought by Narayanaswami Iyer but firmly said “Wait for a while, that Maha Linga Swami himself will give me
anugraham for Prasadam”.

Just then a Pundit aged around 65, looking fresh with rudraksha around his neck holding a plate arrived there. He told Maha Periyava: “My name is Maha Lingam. I am the Archagar in Tiruvidaimarudoor temple.
The Pundit continued: “Yesterday there was a Rudra Abhishegam for Maha Linga Swami. I came to offer the Prasad to Periyava and take His blessings”.

When he was going to do Namaskaram, Maha Periyava stopped him saying “those who got Siva Dheeksha should not do Namaskaram to me”. MahaPeriyava took the Prasadam and offered Matam’s ‘return gift’ –prasad.

Narayanaswami Iyer told Maha Periyava repeatedly that he made a big mistake and asked for Prayaschittam- ‘how can I wash this sin?’

Acharyal got up and said, “I cannot tell you the Prayaschittam for this. Only Thepperumanallur Venkatesa Ganapadigal can tell you”. “But will he tell me, after whatever I did?” asked Narayanaswami Iyer.

In a loud voice, Maha Periyava said: “If you have the Praaptham he will tell you”. So saying, He went inside to His room.

Maha Periyava did not come out for long. Narayanaswami Iyer now decided to meet the Ganapadigal. He took a bus and reached Thepperumanallur next day. He wanted to plead for pardon from the Ganapadigal, get his blessings and then only go back to his place. When he reached the Ganapadigal’s house, he saw a lot of people
there………the Ganapadigal left for his heavenly abode early that morning!

What Maha Periyava said hit his head: “ If you have the Praaptham, he will tell you”.

He said to himself, “Maha Periyava knew I did not have the Praaptham – what a big sinner am I”.

However, he did Namaskaram to the Ganapadigal’s body and left back to his village.

Later on, Sri Narayanaswamy Iyer did a lot of service for the Mutts in the North and obtained Mukhti in Kasi.