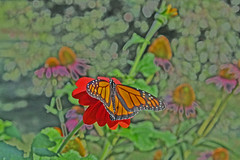 Brahma Kamal : known as King of Himalayan flower.Botanical name is Saussurea obvallata. The Brahma Kamal is the state flower of Uttarkhand, India.
This flower is very sacred to Himalayan gods. It looks like bliss in the form of a flower. The story goes that once Lord Shiva was in Kailash and Parvati created Ganesha, which was unknown to Shiva. When Parvati went for a bath, she posted Ganesha as a guard outside leaving a word not to let anyone in and that moment Lord Shiva tried to enter the house and Ganesha refused. In anger Lord Shiva cut the head of Ganesha, so there was just the body without the head.On Parvati`s request Brahma created Brahma kamal, with whose help Shiva placed the head of an elephant on to the body of Ganesha.

In Ramayan when the Sanjeevani herb was administered to Lakshman, he miraculously revived. In celebration, God showered flowers from heaven, which fell to the earth and took root in the Valley of Flowers. So it is called Brahma kamal, which is The God’s own lotus, far from the earth!

There is a belief that the Brahmakamal should be gifted, and not bought in the market. To grow the plant, a leaf is planted in the soil (and not a seedling or stem). This leaf then multiplies and becomes a plant to a height of about 4 to 5 feet. The flower itself is around 4-5 inches in diameter and has a lovely fragrance.

This is a still to open bud of the flower. Check how the stem is coming from the leaf. This flowers always grows from a leaf.
http://nav-justanyrandomtopic.blogspot.in/2012/07/nature-brahma-kamal-flower.html
28.626674 77.147078

One thought on “Brahma Kamal”